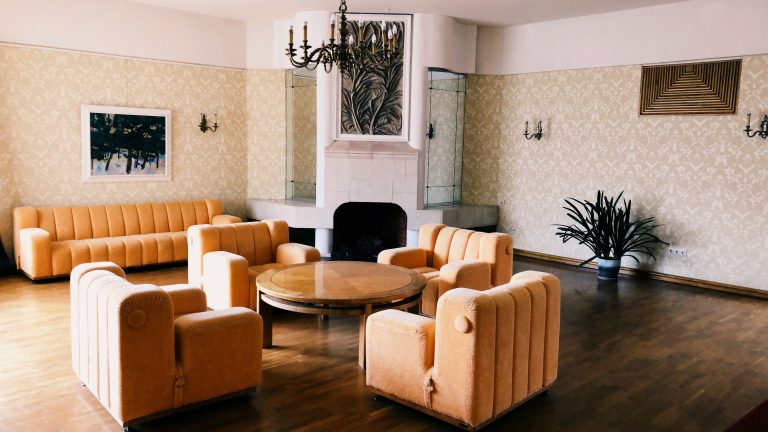 There are not may hotels which are experience itself in Lithuania. One of them is brutal soviet style villa converted to 4* hotel “Auska” on the shore of Baltics sea in Palanga.

This villa was opened back in 1979. Locals call this building as “Villa of Brezhnev” referring to Leonid Brezhnev, General Secretary of the Central Committee of the Communist Party of the Soviet Union. This title de facto means President of Soviet Union – he took this office from 1964 to his death in 1982. Actually, he never visited this villa, but the unofficial title make sense villa was designed as a resort for rulers of Soviet union (and many of them actually was there).

Villa originally had only space for sleep of 10 persons – top person and his family. But villa takes territory of 23 hectares almost on the beach of Baltic sea. It is built in Soviet gigantism style with massive doors and plenty of public space.

One of the unique objects in villa is a huge pool in shape of Lithuania which is being filled with sea water. Special 1,5km long pipe was built to pump water directly from the Baltic sea. Impressive swing.

After announcement of independence, villa was still used as holiday place for presidents of Lithuania. But some time around 2010, villa was rented out for private company which increased number of rooms and converted to 4* hotel.

This summer I booked this hotel for 2 nights in the middle of August. Deluxe double room was priced 250 EUR for two including breakfast at peak season’s middle of the week. You can get bargain prices in low season as Palanga is very seasonal resort.

Villa has a lot of authentic details and you feel gigantic spaces all the time. Even hotel was fully booked at a time, it feels empty. I saw some people at the pool and during breakfast (which is relatively small room, comparing with gigantic spaces all around).

This is single property I know in Lithuania with direct access to the sea – no other place can beat that. You can go barefoot to the sea for a morning swim. It also has huge private park around.

Authentic pool with heated water direct from the sea is still working, but the pool is not well maintained.

There are literally a lot of space in the hotel – you can walk far through few rooms and doors to reach your room, but you can expect a lot of privacy. Rooms are really clean and huge – at least Deluxe room I booked. Some more luxurious rooms has balconies with sea view.

I left hotel with mixed feelings. It gives huge impression on what luxurious  top persons resort looked like in Soviet times. But there are some details hotel try to make it work as todays standards and its not good and reduces feeling of constant authenticity. Some modernisation is done badly. Lithuanians have specific word to describe that: “euroremontas” (euro-repair may be a correct translation, but it is more negative).

I suggest hotel should play more with authentic old-style foods and details: this would create more fun. Because it is authentic!