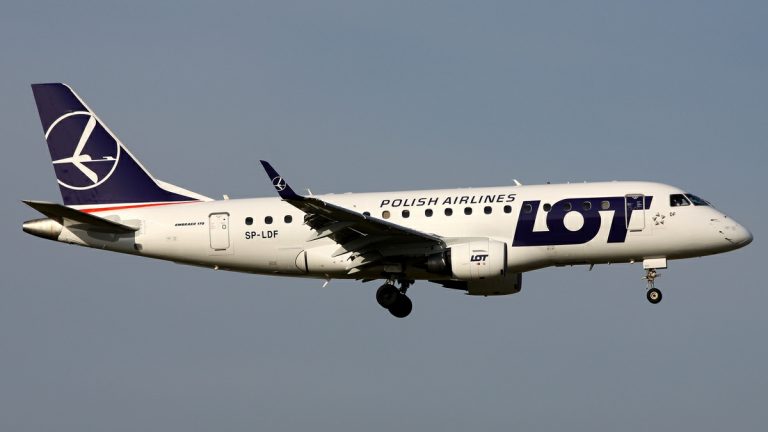 This is closest country from Baltics to the West. During 1990s, many people from Lithuania, Latvia drove through Poland to Western Europe for different purposes – tourism or seeking better life. Still, drive is not cool these days: there is 483 km between Vilnius and Warsaw but it will take 6 hours to drive as there is no highway. Riga to Warsaw is close to 700 km by road.

Lithuania and Poland have very strong historical ties. Lithuanians and Poles have a Commonwealth between 16 and 18 century. Between World War I and World War II Vilnius was a city in Poland and 66% of Vilnius inhabitants were Poles in 1931 (Lithuanians were less than 1%). As of today Polish ethnic group take 16% of Vilnius (but decreasing).

All these reasons listed should make huge air traffic between Poland and Baltic countries, especially Lithuania. Well, not that much.

On January 19th, Wizz Air will perform last flight from Gdansk to Vilnius. Route were launched in December 2017, as 3x weekly, later reduced to 2x weekly. This came not as a surprise: it was visible low load factors on the route and many fares under 10EUR. There was no competition on the route.

It was more surprising when in October Wizz Air also cancelled flights between Warsaw and Vilnius. This 4x weekly route also lasted for year – Wizz Air launched flights in September 2017.

Vilnius to Warsaw is one of the largest routes from Vilnius airport, but it looks only LOT can fly this routes profitably. LOT used to fly 2-3x daily on this route, but in 2017 they increased operation to 5x daily and it helped them to push “Wizz Air” out.

In 2012, there was another try to grow traffic between Poland and Lithuania. At that time, independent carrier Eurolot opened 2x weekly route from Krakow to Vilnius on Dash8, but it lasted only one summer (later on, Eurolot went out of business and was merged with LOT).

LOT Polish Airlines has complicated joint venture with aviation group Nordica which is de facto national carrier of Estonia. Or it may be better say Nordica is virtual national carrier of Estonia. LOT owns 49% of airline called Regional Jet, which is capacity provider for Nordica, LOT and also SAS. Nordica takes capacity from Regional Jet and uses LOT as commercial platform – all flights are being marketed with LO callsigns and flight numbers.

With this cooperation, LOT is growing Warsaw to Tallinn route which will go to 4x daily in January 2019. There are no other flights between Estonia and Poland.

Riga to Warsaw route is complicated relationship between LOT and airBaltic. Those two airlines are moving from cooperation to competition further and back. I was Warsaw to Vilnius via Riga two years ago and airBaltic was selling Warsaw-Riga sector operated by LOT, but it looks it is not a case any more. Also, now LOT increased flights to Riga to 3x daily, including overnight stay in Riga – I believe this is something airBaltic is not happy about. On airBaltic website LOT is still indicated as codeshare partner, but was not able to find LOT operated flights in airBaltic booking engine as of December 2018.

airBaltic has seasonal route from Riga to Gdansk which is scheduled to operate 3x weekly April to October in 2019. It is not strong route for airBaltic: they operated this route in 2011-2012, but then cancelled in 2013. In 2018 they re-launched Gdansk again.

In March 2016, LOT Polish Airlines started route from Warsaw to Palanga. It supposed to be all-year-round high frequency route for connecting traffic, but it was converted to summer-seasonal operations just after first sales figures appeared.

In spring 2018, LOT started route from Warsaw to Kaunas. This route received subsidy from Kaunas city municipality for 375 000 EUR for three years. This is 6x weekly operation from Kaunas to Warsaw – LOT sends of their Dash Q400 to overnight in Kaunas Airport to maximise connections.

I think, airBaltic is not as big in Poland as it could be. Being strong regional carrier, airBaltic operates few routes in countries like Lithuania, Finland, Norway or Denmark, but they fly only Warsaw all year round and limited flights to Gdansk.

It comes to conclusion for me, only LOT Polish Airlines is able to make routes work to Baltics. They have different strategies, but they aggressively defends their positions on each route. After Wizz Air failure when they have to cancel two routes from Poland to Vilnius after one year I do not think we will have any low cost flights between Poland and Baltics soon.