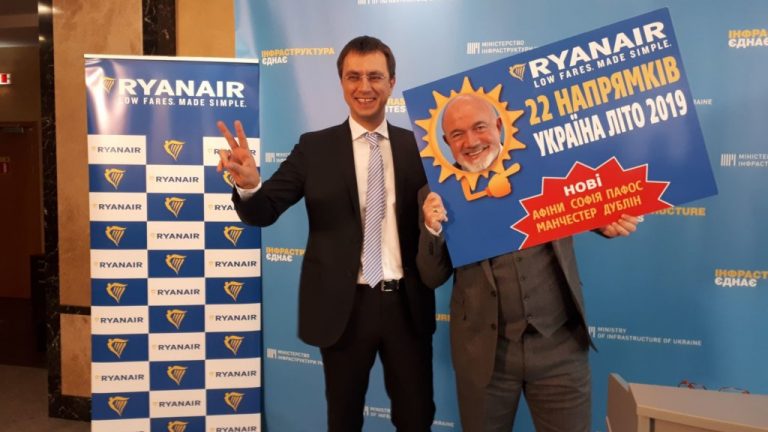 It is different with Ryanair flight FR3084 VNO-KBP. After take-off from Vilnius airport Ryanair pilots headed west before they took heading towards south and being far in cruising altitude they turned left towards east. The reason of non-straight path – Ryanair aircraft is avoiding Belarus airspace.

Extra 25 minutes onboard is small inconvenience for passengers, but its substantial extra cost for airline, especially when they need to compete head to head with Ukrainian competitor who are doing really well in terms of costs due to lower labor costs in Ukraine.

I noticed, all Ryanair flights are avoiding Belarus airspace. But Ryanair is not flying many routes in this part of Europe (especially North to South) so this act of avoidance is not that visible.

Direct route from Vilnius to Kiev crosses Belarus airspace in full extent if to to go straight. It is close to two months Ryanair operating this route all sectors so far operated avoiding Belarus airspace.

Why Ryanair is avoiding Belarus airspace? Is it just to be able to sell more drinks and lottery tickets inflight? Good, no – fuel bill is way larger for this half an hour extra flight. I raised this question on my Twitter month ago and the best comment I received saying this is related to Irish Financial Act 1992 under which the government has prohibited transactions with Belarus. This act is mentioned in Ryanair financial reports saying this has impact for Ryanair business.

This is crazy. Ryanair is not flying even to Belarus its just crossing its airspace: going straight could help reduce costs and save CO2. I do believe Irish Acts prohibits do financial transactions meaning Ryanair will not be able to pay for air navigation services.

If avoidance of Belarus airspace will continue, this will become more and more problem for Ryanair with expansion in East Europe.

Traffic between Vilnius and Kiev is booming last years.

Traffic boosted since 2015, when first LCC entered route: Wizz Air started flights between Vilnius and Kiev Zhuliany airport. Still, Wizz Air is not leader. In 10 months of 2018, Wizz Air served 39 408 passengers: this is 21% of total traffic on the route. Ukraine International is taking bigger part of the traffic also serving connecting passengers from Vilnius via Kiev to Tbilisi, Tel Aviv, Dubai, Bangkok, Istanbul, Baku, Yerevan and other destinations.

After Ryanair started flights in October 2018 with 3 weekly flights, another boost in the traffic is expected.

By the way, Wizz Air is flying via Belarus airspace with average flight time VNO-IEV under one hour.